Working on the engine

The actor’s homework: marking and naming the beats

I know your secret. You did a great job in the audition. You got the part. Then you went in your room with the script, closed the door, threw yourself on the bed and started figuring out how to say the lines. Huh-uh. Wrong. This is the road to C-minus acting.

Last time we talked about finding out and examining the facts we could discover in the script to start building up our store of ideas and our sense of character and situation. “Hmm, let’s see, it says Helen’s been up for thirty-six hours straight. What happens to me physically when I’m really, really tired? Why didn’t she go to bed? What does it feel like to wear the same clothes two days in a row?” Finding the circumstances and asking questions of them, much as a detective does of a crime scene, builds up our reservoir of information on which we constantly draw while we act the role.

Now, voyager, we’re on to something else. We need to break the script down into smaller sections so we can work on it piece by piece. When we say we are “working on the car,” we really mean we’re working on some element or subsystem of the car: the oil filter, the spark plugs, the brakes. So, how can we divide up this play?

The answer is, into beats. A beat is a section of lines that all talk about one thing, such as, “Are we going to break up?” or, “Why are we both angry?” or, “Shall we go to Chicago next weekend?” Yes, you’re right, it’s sort of like paragraphing. Sometimes the beat is completely clear because both people are talking about cars, or the upcoming track meet, or why Harriet doesn’t come to the restaurant any more. Sometimes more than one thing is covered: the dangers of mountain climbing and cleaning up a room, but underneath you know they are talking about ending their relationship. We’ll call this less obvious beat subtextual.

Now, whether the beat is straight up or subtextual, we’re going to put brackets around it, like this:

JACK: Let’s go over to the graveyard.
JOAN: Again?
JACK: Hey, it’s been a month.
JOAN: No more.

Okay, we’re going to go through the parts of the play you’re in, bracketing the beats. They are going to be the raw material for our work on the role. Even this act of finding the beats enlightens us. We discover, sometimes much to our surprise, what’s really being talked about and what our characters’ concerns really are. The character revealed in this process might be much more manipulative or much more self-concerned or self-criticizing than we had thought. 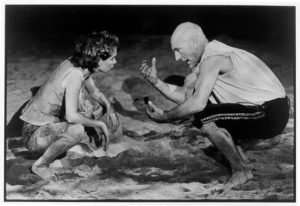 How long does it take to bracket the beats in a good-sized role in a full-length play? Oh, at least a couple of hours. Hey, you’re the one who wanted to get into show business! And this process is essential. Take my word for it, this is work you have to do.

All right, you’re finished with the bracketing—now what? Take a break and come back to the script the next day. You’re already into the process, more interested in your character. You can do something else and let your subconscious mull it over.

When you’re ready to go back to the script, you’re going to identify what each beat’s really about and write it in the margin, just outside those brackets. Consider this beat:

HIM: I don’t care if your stepfather sent it. Too many nuts, too many fruit whatchamacallits.
HER: The idea is excess. Fruitcake. Jam-filled. Hey, get into “too much.”
HIM: Yeah, and you’re too attracted to “too much.”
HER: And you need to go with the flow. How many times do I have to tell you that? Taste the fruitcake!
HIM: Huh-uh.

Yes, yes, they’re talking about fruitcake. Actually, they are arguing about fruitcake, but why? What’s really going on in the fruitcake beat? Maybe it’s about power or dominance in the relationship. He needs to have his way this time because she’s been having her way all the time. If that’s your sense of it, you write in the margin, “It’s about equalizing the relationship.” Hmmm, that’s a really useful acting insight. Understanding what the beat’s about is key in playing it.

ANNA: You only see her, what, once a month?
MICHAEL: Exam time, it’s really busy.
ANNA: It hurts her feelings. It hurts my feelings.
MICHAEL: Trust me, your mother can live without me.

That beat discusses why Michael avoids Anna’s mother. But what’s the deal with that? What’s at stake here? Maybe Anna’s mother doesn’t like Michael because he avoids her. Maybe she is putting pressure on Anna to go out with more than one person. Well, what will we write in the margin this time? Perhaps we try, “Saving the relationship.” You get the idea. Beat by beat, we build a sense of what’s happening to your character, and how she’s responding as well as what she’s feeling. By the time we name our last beat (remember we’re only doing this for the sections you’re in), we know a lot! Could be we’re even getting excited about this part, which raises your acting a notch immediately.

All right, on to something even more essential in the tuning of our role’s engine: the action. What’s an action? (Some acting books call it the “objective.”) This is the acting engine’s ignition. The action is—listen up, now—what you want the other person to do, to feel, or to understand. In that order. If you can figure out what you want them to do, that’s best. Stop there. If you’re buffaloed, try “to feel” and then finally “to understand.”

By the way, I hope you’re writing small in the margin, because you’re going to want to write the action and some other stuff in there too. We’ve already taken a shot at “what the beat’s about,” and the action will probably relate to that. So, in our beat about the fruitcake, what does your character want the other character to do? We said the beat was about power or dominance, so how about saying her action is to get him to “give in.” Let’s look at that for a moment.

Here’s where we need to go back to our regimen of asking questions. What do we mean by “give in?” Give in to what? “Give in” to achieve what? “Give in” in what way? If her stepfather sent the fruitcake, maybe he wants her to “give in” so that she realizes how manipulative the stepfather is and what a bad effect that’s having on the relationship. The point here is that your instinct about the action (what he wants her to do, feel, or understand) may take some refining before you can actually play it. In our imaginary play, let’s say we decide his “action” in this beat is “to get her to admit her stepfather is a problem.” See, it wasn’t really about fruitcake after all.

Now, how will we know when the action we’ve chosen is complete? Well, she’ll say, “Okay, I get the point. My stepfather is a problem for us!” Does she say that in the script? No. But, that’s all right. An action doesn’t always pan out for the character. But, at the point you abandon the action (which would be the end of a beat), a new beat starts with a new action:

HIM: Look, let’s forget the fruitcake and go to a movie.
HER: I’d rather go dancing.
HIM: You know I don’t dance.
HER: Well, why won’t you learn?
HIM: Look, I’ll just see you tomorrow.

All right, what’s this beat about? “It’s about what they are going to do together.” Yes, but what’s that about? We have to know in order to name the next action. From his point of view, it might be about her continually being too critical of him (fueled, no doubt, by the stepfather’s dislike of him). From her point of view, it might be about his needing to be more willing to take risks and even to fail occasionally. In other words, she needs him to loosen up if they are going to spend time together. 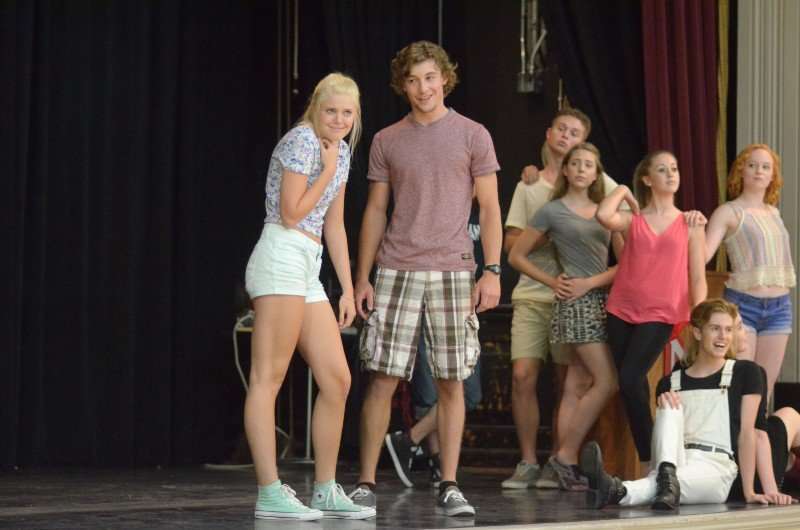 So, what does he name his action for this beat? He wants her to stop criticizing him. Good. Does she criticize him in the next beat? No. Then he achieved the action. What’s her action? She wants him to understand that he doesn’t always have to be “successful” for her to enjoy and like him. Now, if that’s her action, she won’t play the lines harshly —not even, “Well, why won’t you learn?”—because the action implies she is also reassuring him that she won’t abandon him if he dances badly. This is the way the action forms and tones our performance. And, by the way, does he ultimately say he’ll go dancing? Yes. So she achieved the action.

This means it’s your job as an actor to do your homework. We need to break our role into beats, name the beats, and then define our “action.” For a big part, you should plan on spending several hours on this work (though not, of course, in one sitting).

Perhaps you have some questions. Like, “Can’t we skip this process?” No, it’s our road map. Acting needs destinations and the ways to get there. “Isn’t there any shortcut? I’ve got too much to do.” All right, I’ll give you a shortcut, but this is just for emergency use.

If you are too hard-pressed to break down the entire role this way (and, honestly, you need to), at least do the key beats. What’s a key beat? Those sections and scenes that are most important to your character in the play. The big love scene. The big fight scene. The scene that makes you leave home, etc. It will cut down on your “homework” and improve your performance, but where you don’t know your character’s action, you’re going to be faking it, and it’s likely to be noticeable compared to the sections where your actions are clear.

One more point about the action. Actions are made to be tried in rehearsal. If the action you are playing doesn’t animate the scene, doesn’t really get it going, doesn’t drive your partner into a strong reaction, you may have to rephrase the action or invent a different one that still suits the circumstances. An action is something to try; it may not be the solution. A good actor may rephrase or replace a single action several times during a rehearsal period. Or you may have to “raise the stakes.” But that’s our conversation for next month.

Jon Jory, the artistic director of Actors Theatre of Louisville for thirty-one years, is now teaching, acting, and directing at the University of Washington. This article is the second in a series that began in September 2000.