The stages of rehearsal

Let’s talk about the actor’s work in the final rehearsal push before opening night. In many ways these last rehearsals are the most fun and most important. In my many years of work as a professional director, I’ve noticed that the actor often wastes these endgame opportunities.

In the broadest sense, the rehearsal process can be divided into three parts: the beginning, middle, and end.

Before rehearsal begins, you read and reread the text. How many times? A minimum of six. Twelve is a good target number. That should be enough to stimulate both your conscious and unconscious mind. I know it sounds like a lot, but you want the basics of the story and your part to seep into your very bloodstream. You want to know not only the story but also the central idea the playwright wishes to communicate to the audience. What is this play telling us about living our lives?

Why do you need to know the big picture? Why can’t you just work on your part and leave the larger meaning to the director? You have to understand how what your character does and says contributes to the play’s theme. Let us say that you take the play’s point to be that if you don’t truly know yourself and aren’t honest about what you know you will harm those who love you. Then the question for the actor becomes how does what your character does and says help clarify that theme? Trying to figure out your role’s function in making the play’s point is a big part of your work in the pre-rehearsal and early rehearsal period.

Also in the first third of the work there are the practicalities of learning your lines and blocking, and the more abstract task of identifying the way your character changes during the course of the play. And you will spend a lot of time identifying actions and obstacles to your actions and endlessly thinking about the play’s circumstances and how they might make you behave during any moment of your stage time. As you head into the middle of the process (weeks three and four of a six week rehearsal) the tasks change. You already have a good sense of what your character contributes to our understanding of the play and what it is your character wants. The middle period of rehearsal is the time to look outward.

What are the other actors doing and saying that affects and changes your work? Often I see actors playing a certain “want” but paying no attention to the look on the other character’s face. If you saw that look on your boyfriend’s face while you talked about being busy for the next two weekends, it would change the cut-and-dried way you are delivering the news to something more empathetic. In the middle of the rehearsal period, you should be secure enough to begin reacting spontaneously to what the other actors are giving you.

This brings us to the final week, the dress and technical rehearsals and the performances. Yes, in the performances we are still working and growing. In a way the performances are the best rehearsals of all. Many times I’ve heard an actor who has been playing a show for six months say, “I wish we weren’t closing tonight, I just got a bunch of new ideas for the last scene.” So, how should we be working as opening night bears down on us? Key concepts for the final push include shape, focus, selection, troubleshooting, and setting the other actors up.

Shape is the way the early part of the play and the end of the play seem to form an understandable arc. At a certain point in the process you want to sit down in a quiet place and take a really careful look at the end of the play. How is your character (assuming this time it’s a central one) ending up? How does the play provide closure for your character? Did she get the guy, lose the job, come to terms with a friend’s betrayal? Most importantly, how does she feel about it? What has it all taught her?

When you are sure you are clear about what your character is thinking, feeling, and understanding at the close of the script, a new kind of work begins. From what you know about the end, you can pinpoint the process of getting there. What do you do at the beginning of the play that plants the seeds that grow in the last five pages? What moments in the middle continue that growth? When you answer these questions, you are giving the play “shape.”

Focus is an all-important theatrical concept. The audience isn’t going to be equally interested in everything you do. What moments in the script do you want to have the most focus? As my father used to say, “You only yell once in a play; where should it be?” You’re only going to cry once; where should that be? You’re only going to be deeply hurt once; where should that be? And you create focus not with the “where.” You create it with the “how.” In these final rehearsals you are adjusting what you are doing to make these key moments “read.”

You’re also into selection. Hopefully you didn’t set all your line readings and physical work and sense of the relationships too early. Beware the actor who said “To be or not to be” a particular way in the second rehearsal and has been saying it the same way ever since. In short, you’ve been continually trying different things (which still fit the play’s circumstances) and now you’re selecting the best of the things you’ve tried. Are you “setting” everything? No. But you are setting things that affect timing, pace, physical danger, and those moments that clarify plot.

Also, you’re troubleshooting. What’s that? You know perfectly well that you’re not equally satisfied with every moment and scene. This is the time when you pull the director aside and ask if you could have an extra half-hour of help on pages twenty-two and twenty-three. It’s also your job to identify the moments, lines, and scenes that still seem unclear to you, and give them your full creative attention both at home and in rehearsal. Have discussions about these cloudy parts with other cast members whom they affect. Make sure you come into each rehearsal knowing what you want to work on and what you have to try. You know those signs in Nevada that say “Last gas station for 200 miles”? This is the same thing.

I also mentioned setting the other actors up. This means recognizing not only what you want to do in the scene but also what the other actors need from you to bring their roles to fruition. The clearest and simplest example is when the other person has to say “Stop shouting” and you’re not shouting. More complexly, you may not be providing the other character with a sufficient obstacle to his want. He wants to get married and you don’t. Maybe you’re not making it hard enough for him, maybe you’re being too nice. You’re not setting him up. Raise the stakes for yourself. It will also improve others’ work and the more they improve, the more you will improve.

That brings us to the dress rehearsals. This is where you get a lot of new stimulus that will take you to a new level. Blessedly, you finally have the costume. Actors will say, “The costume gave me the character.” Pay attention to the clothes and yourself in the clothes. What does the costume teach you? Usually it clarifies certain parts of the characterization that should increase or decrease. You suddenly realize that she is not only a lawyer, but a two-bit lawyer and pushier than you could have imagined. In addition the set teaches you. And props! Props can often make the role. The way he caresses that shotgun has a kind of useful menace you never thought of in the rehearsal room. The lighting indicates a slightly different tone to your love scene.

Stay aware. Be kind, quiet, supportive of others, patient, but most of all aware. What can I find here that develops the role? When you’re not on, sit in the auditorium and soak it in. What’s here that can further develop the work? The set itself is often a great teacher. 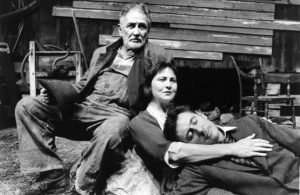 Okay, it’s opening night. Stay calm, don’t juice yourself up, give others confidence. And go over your script. Get to the theatre early and read it through. Check what you know and (don’t tell anybody this) find one new thing you want to try. Not a big thing, a little thing. Surprisingly, trying that one new, little thing will help calm your nerves.

In the performances that follow, find a time to jot down for yourself your notes on last night’s performance: what went well, what sucked. Have a couple of new ideas about the sections that didn’t work (you have to be careful that your new ideas don’t disturb the other actors or the director’s interpretation) and go after them the next night. Always come to a performance with a plan. Go over the circumstances that surround the scene that didn’t work. Pursue an action. Raise the stakes. View every performance as an opening night, a chance for you to present improved work.

When the production has closed, wait two months and read the play again. It will be acutely clear to you what you should have done. That’s also part and parcel of your growth as an actor.

Jon Jory, the artistic director of Actors Theatre of Louisville for thirty-one years, is now teaching, acting, and directing at the University of Washington. This article is the seventh in a series that began in September 2000.