(LOS ANGELES, November 19, 2019) Broadway legend Bernadette Peters was honored with the Craig Zadan Theatre for Life Award by the Educational Theatre Foundation (ETF) at the annual star-studded Thespians Go Hollywood Gala held on Monday, November 18, at The Avalon in Hollywood, California.   Over 300 people were on hand to help raise more than $180,000 that will support ETF’s national theatre education programs for schools in need.

Thespian alum Merle Dandridge performed “Part of the Human Heart,” from Once On This Island and shared, as did others, the life-changing impact theatre had on her, recounting that after seeing live theatre for the first time she had vision, a trajectory, and a sense of belonging.

Jennifer Kumiyama earned a standing ovation from Ms. Peters and the entire audience for her moving rendition of “Unexpected Song” from Song & Dance, a number originated by the evening’s honoree.  Kumiyama introduced the number by saying the song changed her life and gave her exactly what she had needed.

Leading up to the big moment of the night, Megan Hilty, who played Ms. Peters’ daughter in the NBC show “Smash,” performed a tribute medley from Annie Get Your Gun, a show for which Ms. Peters won a Tony Award for her portrayal of the title role. Drama Desk nominee Cheyenne Jackson joined in on “Old Fashioned Wedding.”

Jackson, recounting his rural upbringing addressed the student Thespians on stage saying, “I see myself in every one of your faces. Theatre changed my life. When my teacher, Mrs. Henry, took us to Les Mis the whole idea of what I could do changed.”

Neil Meron presented Ms. Peters with her award which recognizes an individual who has dedicated their life to promoting and preserving the joy of theatre, inspiring young artists, and leaving a lasting impact on generations to come, adding how fitting it was that she should be the first recipient of the award because Craig Zadan had introduced him to her.

In accepting her award Ms. Peters recalled that Zadan was not usually interested in awards but, when he learned what the mission of ETF was he had said, “absolutely!”, adding, “he knew, we know, that these opportunities develop valuable and creative people.”

She addressed the students saying, “The only job that young people have is to stay open, open to your teachers and your inspiration.” She, in turn, thanked everyone for their accolades and tributes with a moving rendition of one of her signature pieces, “Children Will Listen” from Into the Woods.

Matthew Morrison and Marissa Jaret Winokur did the honors of presenting the ETF Entertainment Industry Award to Mark Kaufman, Executive Vice President for Warner Bros. Theatre Ventures, in recognition of their commitment to ETF’s mission and vision of shaping lives by financially supporting school theatre, making theatre more accessible, as well as building the national audience through high standards in theatrical production.

In accepting the award Kaufman said, “We’re really proud at Warner Bros. Theatre Ventures to create shows that can be performed at schools all around the country because we understand the value of theatre — and it’s a mission we really believe in. At a time when education budgets are being cut with arts programs often the first to go, ETF is creating a lifeline for millions of young people to experience theatre for the first time in schools, not only teaching them life skills of collaboration, hard work, and creative expression, but also inspiring the next generation of theatregoers and artists on stage and behind the curtain.”

To culminate the evening of inspiration and gratitude, gala attendees were the first to learn of the launch of the ETF Initiative for Racial Equity in School Theatre, inspired by the life mission of Craig Zadan, who was a visionary with a lifelong commitment to addressing issues of diversity. The Initiative will work to increase access to school theatre in communities facing racial disparity. Each year ETF’s Racial Equity Initiative will award grants to schools to produce a musical or play with the support of a professional production team of color who will be brought in to act as mentors to students.

In addition to the stars participating in the tribute, as is traditional for the Thespians Go Hollywood event, local students* who are members of the International Thespian Society (ITS), were also tapped to perform. They set the special mood first thing, opening with “A Million Dreams” from The Greatest Showman, got everyone going with “Broadway Baby” from Follies, and sent everyone home humming “Raise You Up/Just Be” from Kinky Boots.

ITS is the honor society for middle and high school theatre students, which has inducted more than 2.4 million members into Thespian troupes in the 90 years since its founding in 1929. ETF raises money so that more underserved schools can provide opportunities in school theatre for their students.

The awards were presented at Thespians Go Hollywood, the annual benefit in Los Angeles that supports theatre education programs for schools in need by bringing together film, theatre, and TV professionals, and current high school students. Donations to make school theatre more accessible to those who need it most continue to be accepted here. 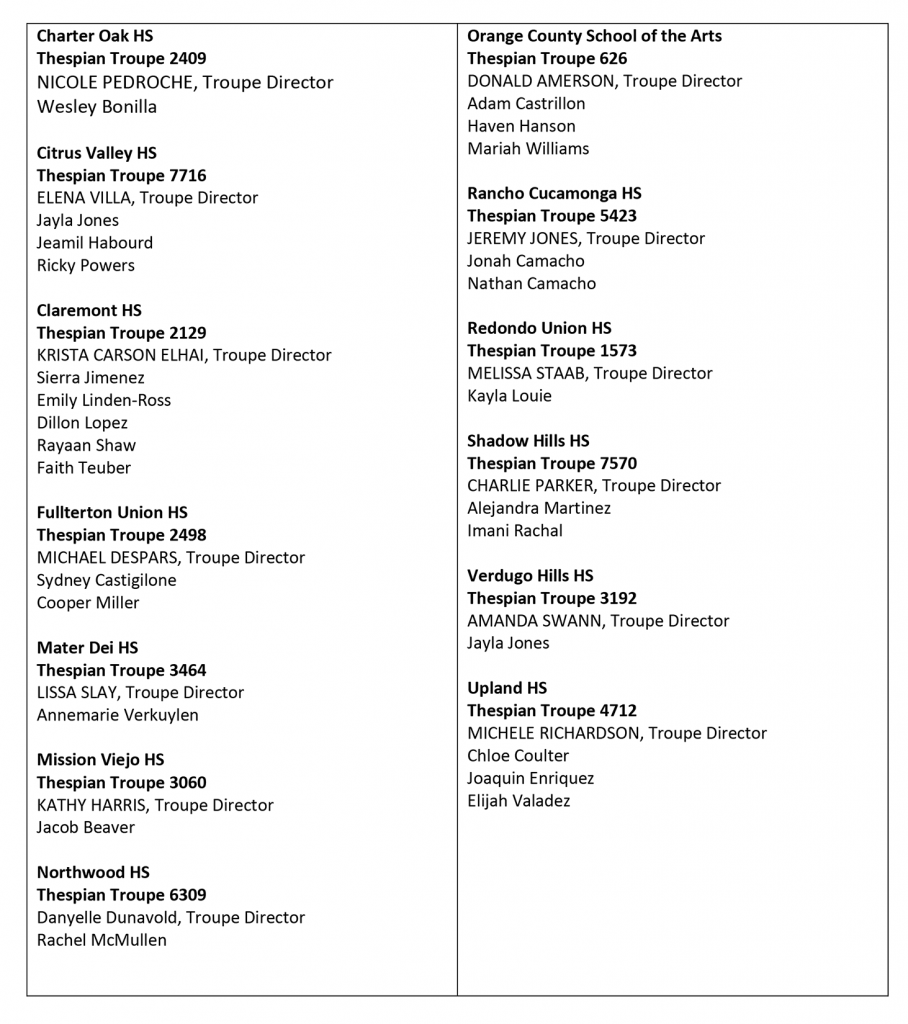 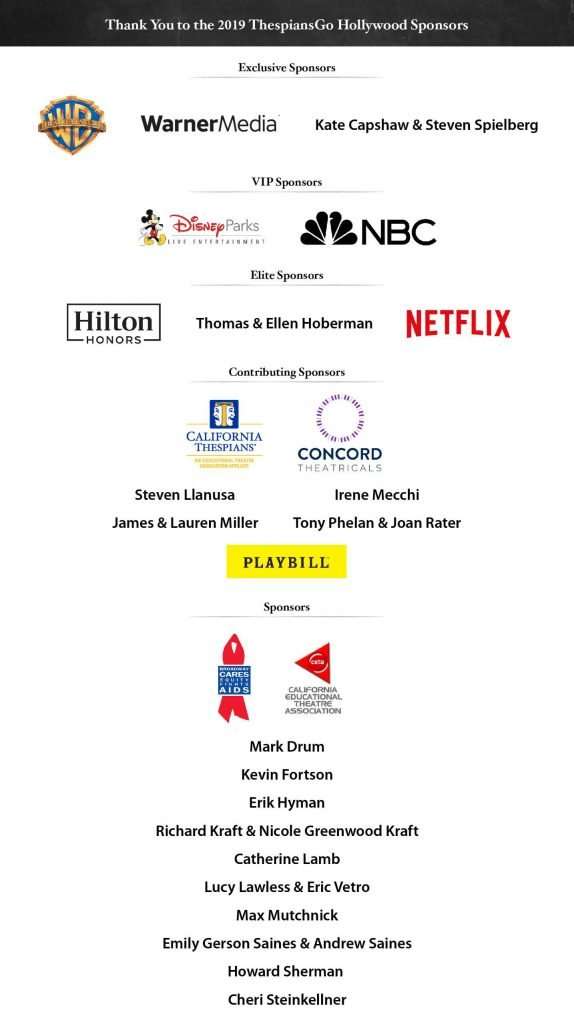