Let’s say, for the sake of argument, you want a career in the theatre (might even be true, huh?). Well, since you’re still in school that might be a couple of years away, but that’s the Big Kahuna, the absolute goal.

In our play (you know, the one about you wanting to go to New York and have a career?) there are several different plot strands. There’s the whole deal about your boyfriend Marcus, who wants you to quit school, marry him, and go to live in Tulsa where his uncle has a job for him in a kitty litter factory. There are two big scenes with Marcus and in both of them he proposes. You love Marcus; he’s funny, bright, and treats you like a princess. You are really tempted to throw everything over for him. You agree. “Yes, I’ll marry you.”

And yet even as you gaze into his baby blue eyes, your superobjective, which is your need to act, makes the decision stressful. You pause before answering. You tremble, you turn away. He asks you, “What’s the matter?”

“Nothing,” you say, imagining your name in lights. “Nothing.” You embrace him, then you suddenly pull away and walk to the window.

“I really do want to marry you, Marcus,” you say indecisively. “Really.” A single tear courses down your cheek.

See, the superobjective is part of everything you do in the play. It’s just under the surface when you go to your aunt’s funeral in act two. It makes your heart pound as the wedding date approaches. Finally, you call off the wedding and no one understands why. You understand. You know what your character really wants.

Hamlet’s superobjective (let’s suppose) is to kill Claudius, the man who murdered his father. Now Hamlet thinks about and does dozens of other things in the play. He chastises his mother for remarrying. He breaks off with Ophelia. He ironically jokes with his old school friends, who have betrayed him. He leaps into Ophelia’s grave. You and I know, however, that whatever else is going on, our superobjective (to kill Claudius) is like an itch we can’t scratch. He looks at the beautiful Ophelia, he walks toward her, he bends down to kiss her, and suddenly an image of his ghostly father telling him he was murdered by Claudius flashes before his eyes. He turns suddenly away from her.

It’s as if you were mixing colors for a spring landscape but you add a touch of grey to the red, to the yellow, to the green. Everything your character does is colored, in some way, by the superobjective. It provides all our different actions (what we want the other person to do, to feel, or to understand) with an overall coherence. The superobjective is the glue of our performance, the thing that makes it all make sense. “Oh,” we the audience say, “That’s why he was so mean to Ophelia even though we can see he’s still wildly attracted to her. He thinks she’s been mixed up in the plot to kill his father, or to cover it up.” 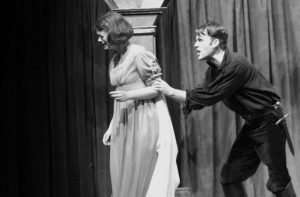 As you rehearse the role, keep checking in on the superobjective. “What does the superobjective have to do with this moment? How does it affect that moment?” Toward the end of the play, there may be a section where your superobjective is dealt with. In The Three Sisters, for example, these young women want to leave the boredom and vulgarity of a small provincial city for the bright lights and society of Moscow. While they don’t give up that dream directly in the dialogue, there is a strong sense at the end that all three of them know that fantasy is dead. Sometimes our superobjective is replaced by another. In Three Sisters, the new superobjective is the sense that you must live your life as fully as possible where you are and under the current circumstances. In other words, live for today, live for the current moment.

In most plays, the superobjective is finally gained. Our hero or heroine finds true love or gets the Broadway role. To sustain the play, however, there are great obstacles to be dealt with. Otherwise the play would be over in a half-hour.

The thing you have to keep in mind is that your character is always pursuing two things simultaneously: the current action (what you want the other character to do or understand) and the superobjective. The superobjective gives a slightly different tonality or quality to the current action. One more example: when Hamlet jokes ironically with his schoolmates, Rosencrantz and Guildenstern, who he suspects have been sent by Claudius (who he believes killed his father) to spy on him, the color of his joking is darker and more bitter because of his superobjective.

This provides a good segue to one of our other topics, “mystery moments.” As you study and rehearse your part, some moments in the text always seem odd, almost out of context. “Why,” you think, “when she’s been offered such a good job and she’s so ambitious, is she so cold and unexcited when she calls to accept it?” Write this down in your notebook under the “Mystery Moments” heading. It joins your list where you’ve wondered why she says, “Then go!” to her lover when you know from the scene before that she wants him to stay, and why she is so rude to her mother on the phone when her mom is seriously ill. Every good-sized role has these moments that seem inexplicable near the beginning of the process. Be grateful for your confusion and lack of comprehension. Yes, grateful. These moments are hidden doors leading to unimaginable treasure.

When you’re midway through the rehearsal process, every day or three you open your notebook and peruse the dozen or so entries there. Magically you suddenly understand items three, eight, and eleven. For one thing, your mind has been hard at work behind the scenes. For another you are now making connections between individual moments and your character as a whole. Cross out the mysteries that are no longer mysteries. A day or so later, open to that page again, and you’ll solve another couple. If you don’t make the list to start with, your mind may never identify the problem and thus never receive your directive to be on the alert for the solution.

Finally, it will prove to be the case that the answers most often have to do with the character’s superobjective. Sometimes it leads to you redefining the S.O., which will take your acting in a whole new direction. If a few of your mysteries remain unsolved right up to opening, the answer may come in performance. Keep the list. Refer to the list. You’ll be amazed at the results.

The gorilla on the table

One final tip for this month. I think it has the best title of all: the gorilla on the table. Here’s the deal. Let’s say the scene starts out with a parent coming home after hearing that the son has quit the basketball team in his senior year. An argument ensues in which Rick, the son, heatedly says that the constant pressure from his father to score more points has soured him on the game. At this point, Rick’s mother tells them dinner’s ready. They pay no attention. Mom enters the scene and the discussion shifts to dialogue about how neither of them respect her hard work, etc. For a full page, the talk is all about meals and not taking off muddy boots. She has doubtless overheard the conversation about the basketball team, but she doesn’t refer to it. What you have to remember is that the event of the son quitting the team is still “the gorilla on the table.” It’s not being talked about at the moment but it is still, in some way, impacting on everything that is said. Over and over actors forget about this gorilla and simply give themselves over to the new conversation, not realizing that the gorilla is still setting the mood.

When working on a difficult scene or finding yourself in a difficult moment, ask yourself what is the gorilla on the table? Often forgetting the gorilla occurs because a new character has entered the scene, deflecting the conversation, but the gorilla is still affecting this new subject matter. You know that after a serious argument with your boyfriend you may go shopping with your mother, go to a movie with a friend, and participate in an hour-long meeting of the prom committee, but the gorilla— the argument—is still making you cranky and inward in these other activities.

Next month I want to talk about what the actor’s job is in the final few rehearsals, then the dress rehearsals, and after that, in performance. For one thing, the search for improvement continues but there are different factors in play during this endgame. We’ll talk about a checklist that can keep you on track as the pressure builds.

Don’t forget to be there.

Jon Jory, the artistic director of Actors Theatre of Louisville for thirty-one years, is now teaching acting and directing at the University of Washington. This article is the fifth in a series that began in September 2000.