How to get what you want

Let us begin the new year with a fifteen second review of the acting basics that we’ve covered in the last few months.

A circumstance (surely you remember) is a fact of the script. Such as: Leslie owns a parakeet. The circumstances give the acting context and detail. For example, if the script says it’s fifty degrees below zero you can’t take off your coat just because it makes you look bulky.

The beat is a paragraph for acting. It’s a handy unit to work on. Usually a beat covers one subject, but if the subtext (what’s really being talked about) underlies more than one subject, the beat could be longer.

An action is usually what you want the other person to do, to feel, or to understand (some people call it an objective). It ties you to the other character and helps you make active rather than passive choices.

The obstacle is what keeps you from completing the action easily. The obstacle makes you struggle to get what you want. The struggle produces energy and makes our work dramatic and interesting.

The stakes are how much you want what you want. To increase the energy and heat up the drama, you just want it more. 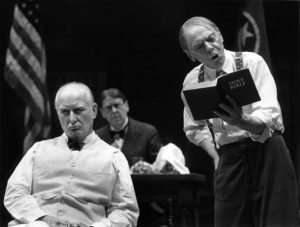 That concludes our review and brings us to what I want to discuss this month: the actor’s tactics. Tactics are, to put it simply, how you go about getting around, over, or under the obstacle and thus get what you want. For instance, you want your father and mother to let you stay out on a first date until one a.m. and they aren’t buying it. The action is clear and their refusal is the obstacle. What might the tactics be?

First, you might try logic. The guy works nights on the weekend and doesn’t get off until ten, you argue. If you had to be home by midnight you wouldn’t have time for a late movie. Your parents don’t care. Next you try pleading, then you try getting angry because they don’t trust you. They stand firm. You try joking with them about the wild stories they tell about their own youth. They don’t laugh. Finally, you try negotiating the time to at least 12:30 and, tired of your persistence, they agree if you’ll call at midnight. Bingo. Each thing you tried was a tactic.

Now, you obviously have to try tactics that are possible within the limitations of the text you have. If there’s no opportunity to joke with them or jolly them up it’s, duh, not a tactic you can use. We tie these tactics to the beat and action. The beat may cover six lines that are directly about the date. Within that beat you decide on your action. A single beat, however, may have more than one tactic. Let’s take a look.

Now, Flora’s action, or objective, is clear, simple, and direct. What is it? Yes, that’s right—she wants her parents to say yes to a later curfew. But the acting, as it develops, could be very different moment to moment depending on the tactics. Let’s consider the possibilities.

During the early speeches when Flora is describing why she needs the late curfew, what might the tactics be? She could try to be cool, concise, and logical, assuming her father would react well to an unemotional approach. Or she might use the other side of her personality, the sweet, excited, charming Flora that has often been able to melt her parents’ hearts. Or she could allow herself to show how upsetting it would be to her after waiting and waiting for this call if they turned her down. Three different tactics leading to three different tonalities in the acting. And this is only on her first speech! Plus, I’ll bet you could think of other possible tactics. The text’s openness to different approaches is one of the reasons why acting is so exciting and absorbing.

We’ll move on now to Flora’s big speech toward the end of the beat. The one that begins “Please, Dad. He’s nice. He’s smart.” Now here there are a wealth of possible tactics. Before I take a shot at it, why don’t you grab a pencil and paper and list a half dozen.

Done? You may have more than six. You may even have a dozen. A moment ago, in describing the scene, I mentioned logic, pleading, self-righteous anger, humor, and negotiation. Add these to your list and you see that there are a lot of different things to try in rehearsal.

One important thing about tactics: they are not simply underlying emotions that that we allow to show. Flora is not pretending to be angry in order to sway her parents, she is angry. The key is that she allows this suppressed anger to show and then, seeing it doesn’t help her cause, she gets it back under control and tries something else. In most cases, this “something else” draws on natural aspects of her personality and ways of relating to her parents. Watch your own behavior (or your sibling’s) when you want something from Dad and Mom, and you’ll see what I mean.

The actions (what you want the other person to do) and tactics (how you go about getting them to do it) are ideas you try out in rehearsal. They aren’t hard and fast truths—you can always adjust or change your actions and tactics in relation to the other actors or under the guidance of the director. For heaven’s sake don’t get into an argument with your co-workers about them. On the other hand, they can get a useful discussion going. There are even times when the director doesn’t know or use this terminology. Maybe, in a pleasant, nonthreatening way you can open up a new world for him or her.

There’s another little secret that impacts on all the tools we’ve been learning how to use, and that is the arc. In life people are usually much different at sixty than they were at eighteen. In theatre they are usually much different in act three than they were in act one. In fact, it’s a good acting tool to think of Flora being different or acting differently at the beginning and end of the beat we’ve been examining. The arc charts the interior difference in the actor between page one and “fade to black…” or over any length of text the actor chooses, or even within a beat.

Why do we use this technique? It allows the actor to sense the architecture of the role. It gives the acting shape and a sense of progression. It provides (and this is crucial) variety in the acting that helps in telling the story and in holding the audience’s attention.

All right, what sort of arc can we see for Flora in the beat about her curfew? What does she feel and how does she act in the beginning and how does that differ from the end? Remember that, as with all the other acting tools I’ve described, there is no single right way. All our choices are subjective but we are always careful to make choices that are definable within the context of the play.

Just for the sake of argument, let’s say that because Flora knows her parents are likely to object since they don’t like to bend the rules and they don’t know the boy, she is tight, defensive, and even spoiling for a fight. Gradually she realizes that isn’t going to help her get her way and she begins to plead her case rather than insisting on it, using elements of charm, humor, and even apology. The arc then could be described as from tight to loose, or from defensive to open. If you were to make this choice you would want to make sure that the tactics you chose allowed your acting to follow that arc.

By tying the tactics to the arc you give your acting a unity that gives the story and your performance more impact.

I call the tactics and the arc the “actor’s battlefield” because this is the area in which our goals in performance are won or lost. Very few of us will break every beat down in this way, but the key scenes or the part of the script where you feel uncomfortable or stiff are the places to get busy.

In March we’ll talk about that superhero of acting tools, the super-objective, with some side trips to “mystery moments” and “the gorilla on the table.” If you want to find out what I’m talking about you’ll have to check in. See ya.

Jon Jory, the artistic director of Actors Theatre of Louisville for thirty-one years, is now teaching acting and directing at the University of Washington. This article is the fourth in a series that began in September 2000.