Allright, we’re getting to the good stuff now! This is the curry powder, the paprika, the hot sauce of acting. No more Mr. Bland Guy. This is the stuff that will make you fiery and unforgettable.

Remember, we’ve already talked about getting the facts we need to do our work (the given circumstances). We’ve discussed how you can break the play into beats, the actor’s paragraphs. We learned how to identify the action (what you want the other actor to do). Now let’s see how we can use this analysis on stage, and how we can make it intense when we need to. 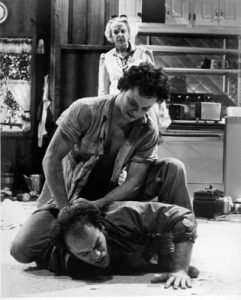 Let’s say you’re doing everything right. You know, and have examined, all the circumstances that impact on the scene you’re doing. You know where the scene takes place, the time, the weather, who you’re dealing with, whether you’ve just stayed up all night, that the car you’re driving has a flat tire and your mother’s in the hospital, and so on. Every moment is affected by the circumstances in which your character finds herself. Even more importantly, you know what your character wants. You know that you want, say, Jim to apologize for telling the coach that you said you might quit the team.

You know all of these crucial things and yet the scene isn’t interesting, it isn’t really fun or exciting to see or do. What do you do? You raise the stakes. That expression probably comes from the poker table. You drew one card and got your third ace, and to win big, you have to “raise the stakes” by increasing your bet. In acting this concept applies first to the “action.” In this scene your action is “I want Jim to apologize.”

You’re playing that but the scene’s still dead meat. Want it more! Don’t just “ask” him to apologize, demand his apology, rage at him if he refuses to give in, threaten, cajole, get down on your knees and beg him for it. Scene getting better? Yes, it is. One side benefit in raising the stakes on the action is that it’s getting your scene partner much, much more involved. Because you’re down on your knees in pursuit of the action he’s got something to do. He’s trying to pull you to your feet. No, raise the stakes, grab his legs. He isn’t going to get away from you until he apologizes!

Raising the stakes means wanting what you want from the other person more, and then more and then more again! Yes, and not only wanting it more, but doing more to achieve it. Keep piling it on until you feel the scene is alive and kicking. Trust me, the director will tell you if you’re doing too much. Because of our natural fears about acting in front of people and potentially being judged, we are usually doing less than we need to in pursuing what our character wants.

Looking down the page, you see the line “Don’t worry about Susie.” That line suggests a different way of raising the stakes, because Jim’s fear that you will tell Susie what he did is the obstacle to getting his admission and apology. Put everything into that line. There’s where you really need it. You get up off your knees, you walk over to him and touch him, for the first time in the scene, by putting a hand on his shoulder. You make eye contact so he can see you mean it. Passionately but calmly and separating the words slightly for emphasis, you say: “Don’t… worry… about… Susie.” A pause. He smiles. That’s your apology. Because of the high stakes surrounding this moment your character explodes with a giant sigh of relief. Fabulous!

“But wait,” you say. “Hold on. I thought you said the action was to get him to apologize? He didn’t apologize, he just smiled.” Well, first of all, every action on stage isn’t completed. As a matter of fact, when we find out we didn’t get what we wanted, that starts a new beat just as surely as if we had gotten it. A new beat, a new action. In this case, the other actor has given us what we want, but he’s given it to us through the subtext.

The subtext is what we really mean, even if it’s not in the line. Example: Jim and Susie get married. Okay, okay, these things happen. However, Susie finds out he’s making money from a second job he hasn’t told her about. Boy, is she furious! She doesn’t say anything because she’s waiting for him to tell her. He finds out she knows, though, from a coworker. Well, when he comes home from work, this is the conversation:

Now are these people talking about dinner? No, these two people are talking about his second job and why he didn’t tell her. The real story is in the subtext.

JIM: Let’s go to Bill’s Café for dinner. (Subtext: I really need to talk to you.)
SUSIE: No thanks. (Subtext: I’m really angry and it’s too late to fix this.)
JIM: Why? It’s quiet, we could talk. (Subtext: Please. But let’s talk in neutral territory.)

See? And the reason this idea of subtext fits in with our talking about stakes and obstacles is that sometimes the action (what we want the other person to do), the obstacle to that action, and the stakes that will make that action vivid, are all contained in the subtext. So you need to look for the subtext to find that action to raise the stakes on it.

These are the ways we generate heat on stage and make our work compelling, energetic, surprising, and yet suitable to the ground rules. Hot and focused. Blazing but also telling the story. Try it. I can almost guarantee that whatever role you’re rehearsing right now, you need to raise the stakes.

Jon Jory, the artistic director of Actors Theatre of Louisville for thirty-one years, is now teaching acting and directing at the University of Washington. This article is the third in a series that began in September 2000.