In the world of the play, everyone counts

One of theatre’s great truths is that no actor is an island, with the possible exception of Sir Ian McKellan appearing in his amazing one-man show Playing Shakespeare. In fact, every member of the acting company—whether onstage for the play’s entirety or for the briefest of moments—is indispensable to a production’s ultimate success. Here’s how the great acting teacher Uta Hagen put it in her book Respect for Acting: “Unlike the soloist, we can’t perform alone in the theatre… The better the play, the more we need an ensemble venture. The more we recognize that we need each other… the better the chance we have of making theatre.”

Hagen had it exactly right. Ensemble characters are always an integral part of the engaging story that the playwright and director are trying to tell; even those without lines have the power to shape the dramatic landscape. There is a limited number of principal parts in a play, and clearly, the play’s key events are usually about these characters, but the world of the play is about everybody. That is to say, the play’s world can be just as rich, specific, and potentially dangerous or rewarding for both principal and ensemble characters if their preparations to live in the world of the play are equally rigorous.

So how do you create interesting ensemble roles that make a tangible contribution to the storytelling process without violating the cardinal rule of this job: thou shalt not steal focus? Since the word “ensemble” can be defined as all parts of a thing taken together, with each part considered only in relation to the whole, in your ensemble role you should know your relationship to the whole of the play. In other words, you wish to add your creative thread to the production’s tapestry, but without taking attention away from the overall design. Here is the approach my actors have effectively used when creating three-dimensional ensemble roles.

Know who you are

You must prepare for each part as rigorously as if you were playing Hamlet or Ophelia, even if you’re merely the Queen’s handmaid. Your character should be just as three-dimensional as those created by the principals, or we lose the illusion that this theatrical world is real. Granted, this is a tough task since, as an ensemble role player, you have few or no lines to dissect for clues as to who you really are and how you fit in.

The keys to playing your role can be found by asking the right questions and arriving at rich, interesting answers. For example, you know you have a favored position in the court. How did you achieve that? In other words, as the Queen’s handmaid, what’s your backstory that took you from the cradle to the first moment you appear on stage? What is your full name? Who were your parents, friends, other influences in your life?. What have been your best and worst experiences? What skills did you develop as a result of your upbringing? For instance, are you a great listener or trusted confidante? Did your sense of humor or practical approach to life make you a useful assistant to the Queen? What scares you? What pastime could keep you occupied for hours? What qualities do you demand in your friends and family?

These questions are just to get you started. Depending on the play and its circumstances, you’re going to have lots of others you can ask yourself about your character. There are no irrelevant biographical questions when putting flesh on your dramatic bones (although you’ll find some character-building answers more useful than others).

As you go through this process, think about all the different facets of your life that distinguish you personally. Each of us is an intricate collage of experiences, values, relationships and events. That’s true of your ensemble character as well. So, the more vivid, detailed history and psychology you bring to his or her character, the richer the entire world of the play becomes—and that makes for a well-told story.

Live fully in the world

Perhaps the most important function of an ensemble player is to help establish the rules of the production’s world. You help demonstrate the rewards for living successfully in it and the punishments for breaking its rules and conventions.

For example, Oscar Wilde’s The Importance of Being Earnest, one of the most charmingly silly romantic comedies ever written, is set in Victorian London, which had very strict codes of behavior that all members of high society were expected to follow. To thrive, you needed to exude style and a healthy-sized sense of entitlement. Gentlemen rose every time a lady entered or departed from a room and opened the door for her if no one else was nearer. A proper young lady had to learn how to eat fruit in a genteel manner and how to respond to the impertinent advances of a gentleman. No one could interrupt anyone else in conversation without drawing sharp reactions of disapproval.

There were expectations of the servant class as well. One of the audience-pleasing highlights of a recent production of Earnest I directed at Ball State University was the commitment my servant ensemble made to living fully in this world. There was the lazy footman, the put-upon maid, and the insecure head of staff—all trying to survive with at least some dignity intact while faithfully attending to the unreasonable demands of their employers. All three actors worked during rehearsals to develop intricate character histories, including a very specific account of their daily routines, loves and pet peeves, and the progression of their working relationships since arriving at the manor. This domestic trio was as deeply invested in the Victorian world as anyone else in the production. The two non-speaking servants even constructed an entire moment-to-moment narrative to explain what they were up to when they were offstage. Because of their preparation, their onstage responses to the madcap misadventures of this story were spot-on, riveting, and quite funny.

Human beings have an innate need to make sense of the people and events around them. We do this by gathering and processing information. We hang on to what’s useful and discard what’s not. In order to make sure we don’t miss anything, we learn to become focused listeners. Sometimes, while listening intently to everything going on around us, we make interesting or significant discoveries. This is a very specific, other-centered, and active process, and can be extremely effective when practiced onstage.

Your objective in each performance should be to make as many important discoveries that affect you as possible. This will happen every night if you actively listen to what’s going on around you, process what you hear, and decide how it impacts your character, your relationships, and your world. Purposeful listening leading to meaningful discoveries is always a strong character choice for an ensemble member.

Be specific in your choices

My first ensemble experience as an actor was in a community theatre production of Babes in Toyland. We were instructed by a very well-intentioned director to quietly repeat “peas and carrots” to our fellow chorus members with a variety of inflections to fool the audience into believing we were talking. He also told us to be very animated and energetic every time we hit the stage, which led my fellow ensemble players and me to shimmy and gyrate in ways too frightening to describe here. Your character must move, walk, and talk like a real person who has real dreams and needs. It’s true that you do need to speak softly when adlibbing with other ensemble actors, but what you say should always be based on your honest responses to what’s happening on stage.

Ensemble characters also need a clearly defined throughline. That means your role should be made up of a series of actions that are based on your wants or intentions, what the Russian acting teacher Konstantin Stanislavski called objectives. These objectives change and build in intensity as the story progresses. Principal characters have their objectives revealed through the text. You must choose yours through your responses to the play’s events and decide how to endow each of them with personal meaning and importance. Every character on stage needs an arc, a specific path to follow from the beginning to the end of the play.

Finally, all of your relationships with other characters onstage must be specific. Real-life relationships change regularly depending on the particular circumstances of that moment. Sometimes I think my brother is lovable; other times he’s (pick one) repulsive, a whiner, lazy, cool, a hard worker, etc. It should be no different in the world of the play. How you interact with the other ensemble members will shift as the play progresses from one moment to the next. Someone you befriend early in the show may be a character you defy later. 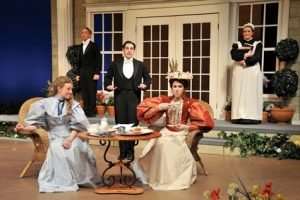 Perhaps the best way for an ensemble member to avoid violating the “no upstaging” commandment is to commit to the perspective of the larger group. Anyone who has ever joined the nameless throngs at an accident site or become emboldened by the anonymity gained when hidden by a crowd recognizes the strength in numbers that members of the ensemble can enjoy.

It is the best of both worlds. You still maintain your personal identity. We see your character’s individual choices, but within the context of the group which surrounds and supports you. It is certainly easier for an angry mob to express their loud displeasure at disturbing events in Bat Boy or The Scarlet Pimpernel than it is for any individual member of the ensemble.

As an ensemble actor, you need to develop an awareness of group dynamics, those processes by which masses of people engage each other to act toward some external goal or obstacle. You also must understand your role within the group, who might help or hinder you from achieving your goals, and how to submerge your identity into the ensemble when pursuing shared goals.

The achievement of true ensemble requires a collection of individuals who want to be part of something bigger than themselves. Such actors are respected for their collaborative natures, powerful imaginations, and sense of responsibility and commitment to do whatever is necessary to create a clear dramatic landscape for the play. Anyone who’s ever occupied the costume of spear carrier number nine or the saddle shoes of the painfully shy friend at the high school dance who never leaves her seat, knows the challenges faced by the actors who breathe life into ensemble characters. Yet, all of those additional obstacles can be overcome with the proper actor preparation.

In summary, clearly know who you are and your relationship to everybody else in the play. Study the world of the play and figure out its rules (whether or not your character actually plans to follow them). Listen urgently every moment on stage and turn the information into important discoveries that will help your character complete the arc of his or her personal story. Make your objectives, relationships, and even your murmured adlibs specific—not general. Embrace the power of a group. Together, these strategies will lead to artistic success for you as an individual ensemble member and, more importantly, a vivid universe for the acting company and audience alike. Just remember, without you and your fellow ensemble actors, the world of the play is incomplete.

Michael Daehn is associate professor of theatre education and directing at Ball State University in Muncie, Indiana. He’s directed more than a hundred productions at the high school, college, and professional level.