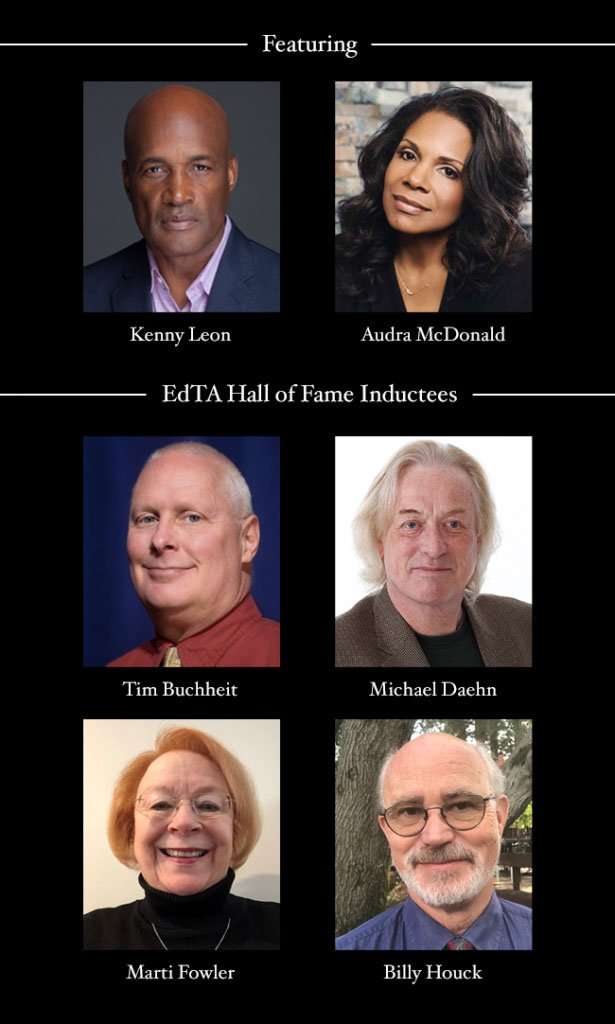 The Educational Theatre Foundation (ETF) will honor award-winning director, producer, and actor Kenny Leon with its second annual Craig Zadan Theatre for Life Award on January 28 at 8:30 p.m. (EST). Samuel L. Jackson and his wife, Latanya Richardson Jackson, will be presenting the award to Kenny Leon, who will be recognized during the foundation’s virtual gala Theatre Alive!: A Celebration of School Theatre.

The event will be emceed live by Nia Vardalos and John Stamos and showcase performances from film, theatre, and television professionals alongside current high school students. Performers include Jennifer Hudson, Audra McDonald, and Amber Riley, with more to be announced. This live streamed, star-studded event is free and open to all. The gala will raise critical funds for theatre programs in underserved schools across the country through an evening of performances, tributes, and stories. During the evening’s program, The Shubert Organization will receive the foundation’s annual Standing Ovation Award, presented by producer Neil Meron, and accepted by Robert E. Wankel.

Nia Vardalos, actress, writer, and director found critical and commercial success as the writer and lead actress in My Big Fat Greek Wedding. Her work on that film earned her nominations for an Academy Award for Best Writing, a Golden Globe for Best Actress in a Motion Picture Musical or Comedy, and a Screen Actors Guild Award for Outstanding Performance by a Cast in a Motion Picture. Ms. Vardalos, an alumna of famed repertory company, Second City, has gone on to write, act, and direct in a number of acclaimed works on television and the big screen.

John Stamos, whose career began on the long-running daytime drama, General Hospital, which earned him a Daytime Emmy Award nomination for Outstanding Supporting Actor in a Drama Series, found fame as Jesse Katsopolis, aka Uncle Jesse, in the long-running hit comedy series Full House. Mr. Stamos has appeared in leading roles on stage, film, and television. Mr. Stamos, also a talented musician, has toured with The Beach Boys and has several other musical credits to his name.

“As all working actors know, the future of our industry is in the next generation. Hosting this event is our thinly veiled audition for these young professionals and we hope they will remember us when they’re casting their projects,” quipped emcee Nia Vardalos.

“The Educational Theatre Foundation is honored to have Nia Vardalos and John Stamos emcee Theatre Alive!,” says Julie Cohen Theobald, President of ETF. “They will take what promises to be a sensational evening to another level. The evening’s entertainment, with stars like Audra MacDonald and Amber Riley performing, is certain to be a captivating experience. Being able to open the gala up for anyone to watch is a real thrill for ETF.”

Since 1990, the Educational Theatre Association (EdTA) has recognized outstanding teachers who have dedicated themselves to the cause of theatre education for more than 20 years through induction into the Hall of Fame. The 2020 theatre educator inductees, Tim Buchheit of Washington, Missouri; Michael Daehn of Muncie, Indiana; Marti Fowler of Chesterfield, Missouri and Billy Houck of Carmichael, California, will be honored during the gala.

Co-chaired by Broadway and television producer Robert Greenblatt and film and television producer Neil Meron, Theatre Alive! will be livestreamed on Playbill.com, Broadway on Demand, and iHeartRadio Broadway. The event, normally held in-person, is being opened for all theatre lovers to attend and enjoy. Attendees can register online to secure their free ticket and to receive notifications as new stars are added to the lineup. The inspiring program will support two critical ETF programs: Thespian Relief Grants to Save School Theatre, which assist theatre programs financially struggling from effects of the COVID-19 pandemic, and the new Pathway program to address racial disparity in theatre.

To attend this livestreamed gala, register online to secure a free ticket and to receive updates. More information about sponsorship and patron support for Theatre Alive! can be found at EducationalTheatreFoundation.org.