Dee Anne Bryll has had a long career working in educational theatre and has been the Artistic Project Mentor for JumpStart Theatre – Cincinnati since its inception in 2015. Her passion to give access to all the benefits theatre education provides, especially to the middle schools that JumpStart Theatre serves, has helped the program thrive. Every person involved with the program makes a positive difference, and here’s Ms. Bryll’s story.

Tell us why you volunteered with JumpStart, and why you’re still doing it seven years later?
I’ve seen firsthand how students’ lives change for the better through their involvement in school musicals, choir, band, etc. I believe that all students should have access to arts programs in the schools. They learn lifelong skills that benefit them: they grow more confident, gain an appreciation for the arts, learn how collaborate with other students and teachers. They often friends who will share their theatre passion for years to come. 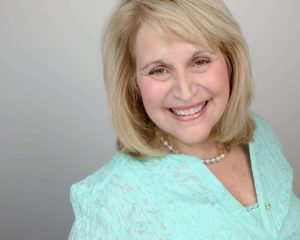 The JumpStart Theatre program’s mission to create sustainable theatre arts programs in underserved middle schools where there were none gave me an excellent opportunity to contribute to making the arts more accessible where there was a great need.

How is the JumpStart Program different now?
The program hasn’t changed so much as there’s a renewed excitement that we are producing live theatre again. The JumpStart Theatre program is needed now more than ever. Especially after these last few years of dealing with the pandemic. It has been wonderful this year to see the JumpStart schools doing productions. Teachers are rising to, and overcoming, the challenges. They’re bringing musicals to their students. There is excitement in the air as students perform their shows.

One particularly moving moment for me was when our first JumpStart school production was getting ready to open last November. The show was Madagascar at St. Bernard Elementary. The first time I saw the sign announcing the dates for this fall musical I got very emotional. We all had been through so much but now theatre was back!

Will you share a particularly powerful JumpStart experience?
There are so many wonderful stories, but for now I will tell you what happened at Summit Academy this year. They put on School House Rock, Live Jr. The school provides a structured safe haven for alternative learners. There were a lot of concerns through the process. For example, would the students performing be comfortable performing for their friends all the way to the end of the show? Another issue might have been that the students in the audience would not be attentive to the performance. Keep in mind that they didn’t get to perform their first year as a JumpStart school (2020), so it seemed a lot was riding on this show.

I attended the performance in April with Susan Jung, the program’s other mentor. We got there early to bring flowers for the teachers and candy for the students. The students were so excited to see us and to do the show. The students took their places backstage with their teachers, who were also running tech! Honestly, we were holding our collective breaths.

The lights went on and the show started, and it was wonderful. The student audience was so attentive, applauding for their friends, laughing at the comedy, and truly enjoying the show. It was one of the most beautiful experiences I have ever had in the theater. 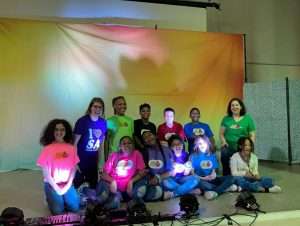 Watching the performing students take their bows after a very successful performance was so powerful. And seeing the teachers’ faces full of so many joyful emotions was a gift. This is the JumpStart Theatre program – this is what theatre can do for a school community!

What would you like to say to those who help fund the program?
First, thank you! Thank you for your financial support because your gifts are changing lives for the better. This program is so vital right now. School budgets and programs are being cut. We all need the arts now more than ever. Students and educators alike thrive on the connections, the storytelling, and the resulting joy. The students that need the arts the most are sometimes those whose schools don’t offer programs.

When you give to the JumpStart Theatre Program here is what you are giving: the joy of students getting to sing and dance, the chance to discover they can play a character very different from themselves, the experience of learning how to build a set or construct costumes, the opportunity to develop technical skills running sound or lights. These are the real experiences and skills that JumpStart brings to schools.

I wish you could see the faces of the students as they run out to greet their families and friends after their performances. I will never forget hearing a father and son after one JumpStart show. The father said to his son, “I didn’t know you could sing like that! I have never been prouder of you.” The young man stood very tall with a huge smile on his face. That was life changing for them both.  ♦

Dee Anne Bryll has been a member of the Northern Kentucky University (NKU) School of the Arts Faculty since 2000. She holds a BA from Baldwin-Wallace College in Speech/Theatre Arts and an MA from Kent State University in Theatre. In addition to her work at NKU, she is on faculty at Xavier University. She is most proud of the fact that many of her students are pursuing careers in theatre as educators, as well as performers, choreographers, stage managers, and technicians on Broadway, regionally, and in university theatres! See Ms. Bryll’s LinkedIn profile for all of her theatre-related endeavors.