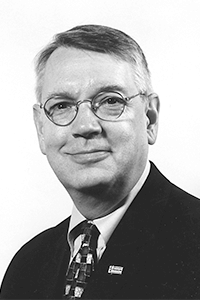 Michael Peitz’s long involvement with theatre began with his induction into Thespian Troupe 615 at Ottumwa (Iowa) High School in 1965. He taught theatre and speech for twenty-five years and has served in a range of capacities for EdTA, including troupe director, state director, regional director, president of the governing board, and executive director.

Mr. Peitz taught theatre and speech at several high schools in Iowa between 1972 and 1997. Along the way he served as sponsor for three Thespian troupes, two of which he chartered.

At Benton Community High School (Van Horne, Iowa), Mr. Peitz expanded the number of theatre courses and productions, purchased the school’s first lighting system and contributed to the design of its new theatre. Under Mr. Peitz’s guidance, Benton Community High School performed several times at the Iowa state Thespian festival and on the main stage at the International Thespian Festival.

In 1986 Mr. Peitz became Iowa state Thespian director. During this period he hosted four state festivals. He was inducted into the Iowa Thespian Hall of Fame in 1997.

In 1996, Mr. Peitz became president of EdTA. The following year the EdTA Board of Directors appointed him assistant executive director, and in 1999 he succeeded retiring executive director Ron Longstreth. For ten years he presided over a period of steady growth for the organization. He was instrumental in building bridges between EdTA and other groups and organizations such as Broadway Cares, the Bravo Network, and Camp Broadway.

John Jensen, an actor and former student, summarized Mr. Peitz’s influence this way: “[Michael] helped me to realize that the one truly unique thing I can bring to any role is my own life experience. Theatre is a very powerful art form–it has the ability to change lives. It has certainly changed mine.”