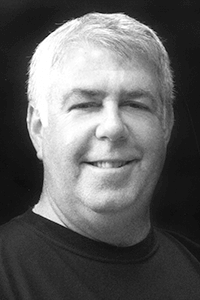 Not long after he started teaching English at John Hersey High School in Arlington Heights, Illinois, Ed Moon was asked to serve as technical director for the school’s theatre department. Going in, he had little interest in theatre or knowledge about it, but he jumped into the challenge feet-first, taking graduate courses in set and lighting design, and he continued these studies throughout his career.

During his thirty-four years at Hersey, Mr. Moon handled technical direction and production for 103 shows. He founded Hersey’s annual children’s theatre show, which has district-wide participation. He also chartered Hersey’s Thespian Troupe 2388 and served as troupe director for eighteen years and as an advisor for six.

When the Illinois Department of Education mandated a fine arts graduation requirement, Mr. Moon developed the curriculum both at his school and at the district level. He later was asked to consult for other districts and was a featured speaker at the National Association of Secondary School Principals 2002 annual conference on curriculum changes in the arts. He served on the Illinois Theatre Association’s curriculum committees.

He served as Illinois chapter director for six years.

Mr. Moon’s school district presented him with the Outstanding Contribution to Education Award in both 1992 and 2004. In 2003 he received the Myrtle Rothermel Service to Colleagues Award, and he is in Who’s Who in American Education.

Mr. Moon retired in 2005, but still keeps a busy schedule, working at Metropolis Theatre in Arlington Heights and consulting for technical theatre programs in the northwestern suburbs of Chicago.