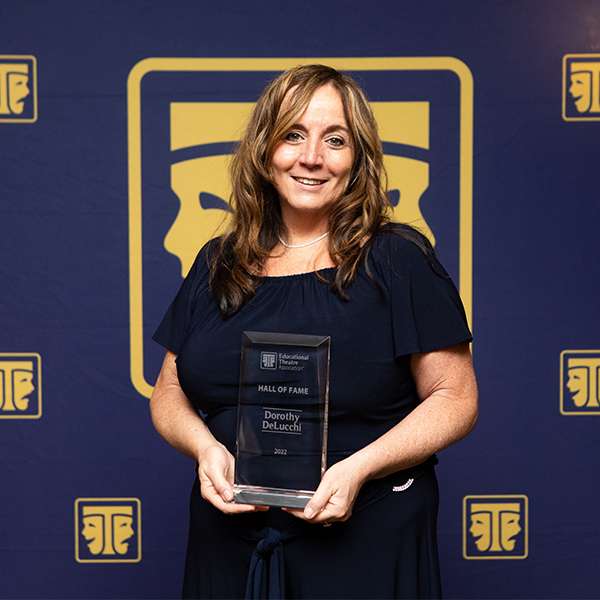 Dorothy DeLucchi began her theatre education career as a student teacher in 2001 on a middle school production of Annie in Boiling Springs, Pennsylvania. That was Dorothy’s first year as a teacher for Frederick County Public Schools. Ballenger Creek Middle School was filled with new experiences for Dorothy, including directing their first after-school musical and reviving the after-school drama club.

Little did she know at the time where her passion for school theatre would take her. Fast forward 3 years, and Dorothy DeLucchi had grown her middle school program to over 100 students participating in the after-school program.

In 2005, Dorothy was recruited by the principal at Tuscarora High School to take over the theatre program at the new high school. In her new position, Dorothy was able to grow the high school program into one of the largest in Frederick County. She chartered ITS Troupe 6972 and produced 8 or more productions each school year. She created a flourishing drama club and ITS Troupe and was a dedicated volunteer board member for Maryland Thespians. Her ITS students became State Thespian Officers with four becoming STO President.

Since then, Dorothy has worked endlessly to strengthen theatre education in Maryland, offering to host the Maryland Thespian Festival at a time when it was in much need of revitalization. And she has led the charge every year since, from 2010-2022. When it doubled and then soon tripled in size, Dorothy secured its new home at the University of Maryland. She created county and statewide theatre assessments and was selected by EdTA to travel to Washington, D.C. to meet with Secretary of Education John H. King.

Of her work, colleague Marla Blasco of Long Reach High School says, “Dorothy DeLucchi helped to build Maryland Thespians into what it is today. In the early 2000s, I met Dorothy for the first time. She was memorable because every time the Chapter Director asked for a volunteer, Dorothy’s hand kept going up in the air. The Maryland Chapter was ready to expand, and Dorothy was ready to lead the charge. It would take many pages to list every contribution that she has made to elevate theatre education both in the state of Maryland and nationwide. Dorothy is not just a soloist singing a song on stage, she is the whole Tony Award-winning musical and plays every part with all her heart.” 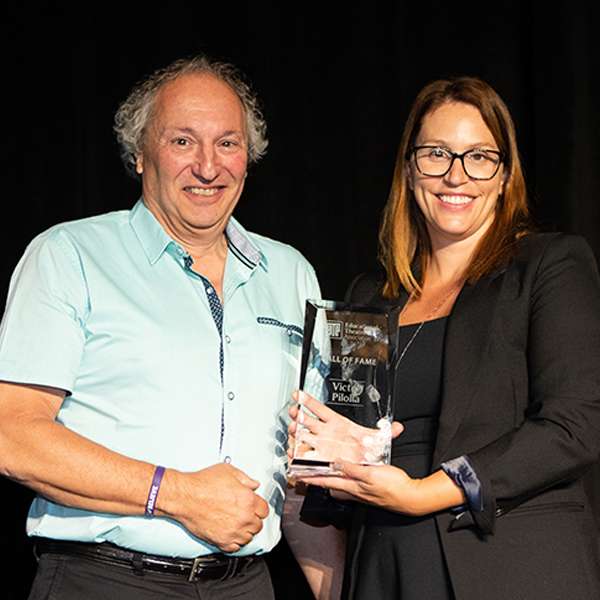 Victor Pilolla spent over 28 years committed to theatre education in so many ways. A contractor by trade, Victor was a theatre kid who loved designing and building sets, but as the father of a young family, was only able to do this as side work. When he first took set building and tech direction contracts for the theatre department at Illinois’ Leyden District 212, Victor found a love for educational theatre that hooked him and within a few years, theatre at Leyden became his full-time career.

During his 28 years at Leyden, Victor developed a top-flight tech theatre program whose reputation for producing highly qualified stage technicians is recognized throughout the state. His passion for technical theatre education led to the development of a six-week summer intensive school theatre program on all things theatre-related, the capstone of which was a summer show and an elective course grade. This was a first at Leyden and Victor was fully responsible.

Additionally, Victor has instituted theatre trip programs that give students in the district opportunities to see shows that they never would have had access to otherwise.

But perhaps the biggest example of Victor’s commitment to educational theatre was his creation of the Teatro Leyden program. In 2012, Victor saw the number of students in the theatre program decline and rather than just accept it, he orchestrated talkbacks with the theatre students and the student council to try to understand why they were less interested in theatre. This led Victor to develop a bilingual theatre program to encourage those students who speak Spanish to come participate in the theatre. This program was such a smashing success that not only did it revitalize the theatre department, in 2018, Leyden was given a Magna award for Outstanding Accomplishment in Equity and Advancement. In 2019, Victor was given the honor and distinction of being the 37th Executive Director of the Illinois High School Theatre Festival.

“Solve the problem” is a mantra that Victor imparted to his theatre students everyday, empowering them to use their experience and skill to master any challenge. Well, EdTA has no problem inducting Victor into the 2022 EdTA Hall of Fame – his experience and skills are well worth it.