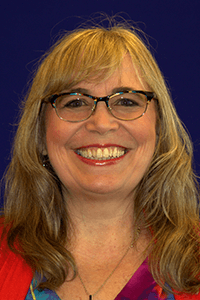 Lori Hathaway feels blessed and fortunate to have spent 28 years working and growing in theatrical arts education. She began her career at Palm Bay High School, where she taught and directed Troupe 2606 and was actively involved in Florida Thespian Festivals at the district and state level. After seven years, she returned to her hometown of Big Rapids, Michigan, where she began a co-curricular theatre program for Troupe 1176, the same one into which she had been inducted as a high school student. She began actively participating in leadership roles in the Michigan Chapter of EdTA. Lori served three years as chapter director and continues to serve on the governing board, head leadership camp, and serve on the executive board for Michigan Youth Arts. She also wrote and edited theatre curriculum and research for the Michigan Arts Education Instruction and Assessment Project. In the community, she also directs, acts as a technical consultant, and leads workshops for area community theatres. Her troupe also worked with the local Children’s Council to raise awareness and perform outreach productions that educated children about making healthy decisions and staying safe. Besides earning many honors, superior ratings, and theatre scholarships, many of Hathaway’s students have pursued their dreams and hold successful careers in theatre. She was selected as Theatre Teacher of the Year by Michigan Interscholastic Forensic Association and has been inducted into the Michigan EdTA Hall of Fame. She would like to thank her school for being a small school with a big heart for artistic excellence, her colleagues and students for teaching and inspiring her every day, and Nick for his love and support.

Gina Parrish is the theatre director at Norcross High School in Norcross, Georgia. She is currently in her 29th year as a teacher and director. Three of those years were at Orange County High School in Orange, Virginia. She graduated from Sam Houston State University with a B.F.A. and from University of Virginia with an M.Ed. “Pev,” a nickname used by all, has often stated that she has the greatest job in the world. She delights in hearing from former students about how being involved in high school theatre changed and molded the person they have become. Parrish served on the Georgia Thespian State Board for several years and directed and choreographed the conference opening number for three of them. She was inducted into the Georgia Thespian Hall of Fame in 2011, something of which she is very proud. She has performed several shows on the mainstage at the Georgia Conference, and her diverse group of students have, over the years, won their region one-act play competitions and moved on to the state level. In 2009, her production of Lost in Yonkers won the state title. For high school students in her area, she helped develop a pre-prom program that involves and drunk-driving reenactment complete with police, fire and rescue, a life-flight helicopter, and a funeral. Her other strength is her family. Her husband, Jeff, is her rock. They have two sons: Nick, who is a wonderful and kind young man, and JT, who is a proud member of the U.S. Navy.