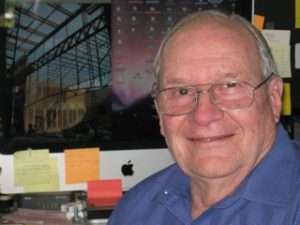 Bill became a member of Troupe 807 in 1947 at Bosse High School in Evansville, IN where he fell in love with theater. He worked in all of the backstage elements but his first love was stage lighting. His experiences in high school led to his becoming the student technical director for the Evansville College theater program.

While in the Army in Germany he spent some time with Special services first installing a dimming system in a building in Frankfurt that was being turned into a theater, then doing the lighting for the All Army Talent Show Finals at the Deutsches Museum in Munich.

Bill returned to Indianapolis to work in a theater equipment company fabricating, selling and installing stage equipment, and meeting his wife-to-be.

In 1958 he was hired by North Central High School and spent 38 years managing a 1500 seat auditorium, teaching speech and technical theater and sponsoring a very active Troupe 1851. The last 13 years he also served as chairman of the Performing Arts Department, Bill retired from teaching in 1996. In 2000 he completed the third edition of his textbook, STAGECRAFT 1.

A Theater Consultant since 1961 he still provides for architects design and layout of space and systems for theatrical lighting and control, stage rigging, and curtains. He has been involved in over 550 school projects to date.

Bill and his wife Cathy recently moved into a retirement community but both remain active in volunteer work with their church and try to keep track of their two very active daughters and their husbands.