According to the annual school play survey conducted by EdTA, The Addams Family, Clue, and Check Please received top billing for the most produced musical, full-length play, and short play, during the 2019-20 school year, which was cut short by the closures required by the COVID-19 pandemic.

Conducted every year since 1938, EdTA’s annual survey of the plays and musicals most frequently produced in America’s middle and high schools provides a snapshot of what resonates with teens, their teachers, families, and communities.

This year’s survey will have a figurative asterisk indicating the incomplete season schools experienced when required to shut down in March 2020. The survey took that into account, asking about both plays that were performed and the impact of cancellations.

Among the performances that audiences enjoyed, Christa Skiles, EdTA’s editor of publications said, “Newly licensed shows made their mark in both the play and musical categories last season, indicating an appetite among teachers and students for expanding the repertoire in school theatre programs.”

The Addams Family retained its number one slot for most-produced musical, followed by Mamma Mia! which debuted at second place in the survey in 2019 as amateur rights became available. Joining the top 10 list for the first time was Matilda, based on the Roald Dahl classic.

In its second year of amateur licensing, Clue became the most-produced full-length play, beating out Almost, Maine, which ranked first for five years. A Midsummer Night’s Dream, which has placed in the top 10 for 31 years, retained third place. New to the top 10 listings were Puffs, Or: Seven Increasingly Eventful Years at a Certain School of Magic and Magic and The Curious Incident of the Dog in the Night-Time.

The works of Jonathan Rand and Don Zolidis continue to dominate the short play category with Rand’s Check Please at the top of the list, joined by Check Please: Take 2 and Law & Order: Fairy Tale Unit. Two works by Zolidis also stayed on the list — 10 Ways to Survive the Zombie Apocalypse and The Brothers Grimm Spectaculathon. The top 10 included a new entry with The Internet Is Distract – Oh Look a Kitten by Ian McWethy. 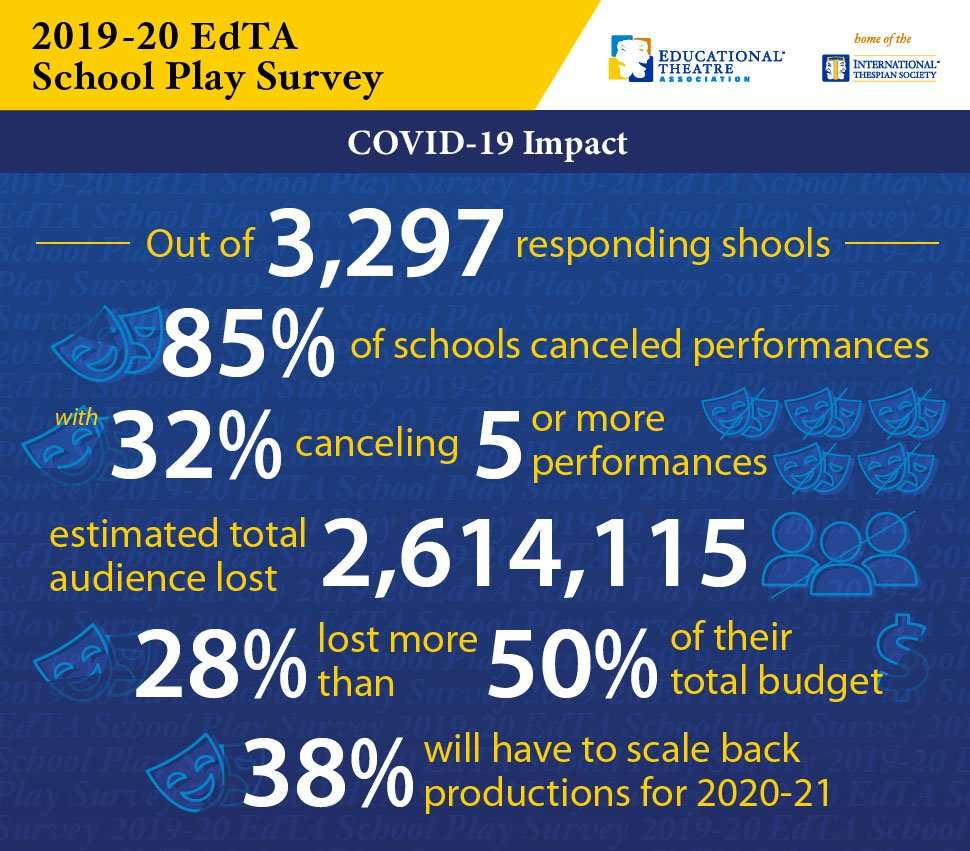 For nearly half of the schools responding, losses translate into cutbacks on their 2020-21 season and/or other arts-related activities and opportunities.

When school theatre is canceled, community members lose out, too. Two years ago, EdTA expanded its exclusive play survey to include not only data on which plays were produced in America’s middle and high schools but also how many people came to see them.

This year, survey respondents reported a total audience of 3.6 million for their school theatre programs with an estimated 2.6 million additional audience members lost to COVID-19 cancellations. Extrapolating these averages to all theatre programs in the U.S. yields a potential audience of more than 49 million for school theatre performances, consistent with what the survey has found during the three years this data has been gathered and roughly comparable to the combined audience for Broadway touring companies and regional theatres.

Since 2015, National Public Radio has kept an interactive database incorporating all the EdTA Play Survey results, which can be found at npr.org.

The Educational Theatre Foundation, the philanthropic arm of EdTA, has established the Thespian Relief Fund which will award grants to help school theatre programs continue despite both their revenue losses and anticipated cuts in school budgets in the 2020-21 school year. More information is available about making donations and applying for grants at ETF Thespian Relief Fund.